When I was very little – I had two kitties.  MJB and JB.

JB was a gray and white, and strong boy and sometimes he didn’t like that I had come to live at his house. He was used to getting all of the attention and being the boss, so it was kind of hard for him at first. He knew I would grow up fast, and take over the real boss role. When mom got out the toys though, we played and got along.

MJB was a pretty blond kitty, and she was my big sis.  She had lots of lessons to teach me and she would always get up on the chair and “talk down” to me.  Sometimes she could just stare at me, and I felt like I wasn’t supposed to argue with her. She could be so serious, so I always tried to goof around with her. She was the best big sis.

Sometimes we all played with the same toys.  That was the fun part. 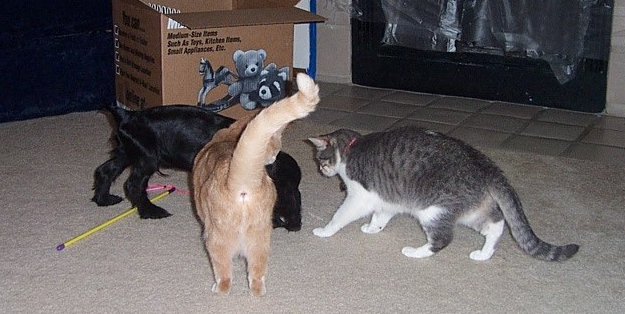